It’s my birthday week y’all! I’m turning 22 on Wednesday (getting old, I know…) so I decided to start my birthday week off the right way…with some bread. In my opinion, nothing can compare to homemade bread; the taste, the smell, the texture…it’s just perfection. I’d rather have birthday bread than a birthday cake…that’s how serious I am about this. So anyway, since it’s officially pumpkin season, it would be wrong to make anything other than pumpkin bread, right? Right.

But this isn’t just any pumpkin bread…it’s pull-apart pumpkin cinnamon sugar goodness. In my opinion, this should be the official meal of fall. It’s like, that good. I know I always say this, but I’m for real this time; this may be my new favorite recipe (not that it changes weekly or anything…) 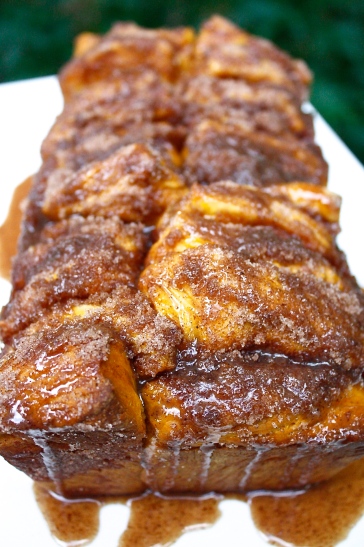 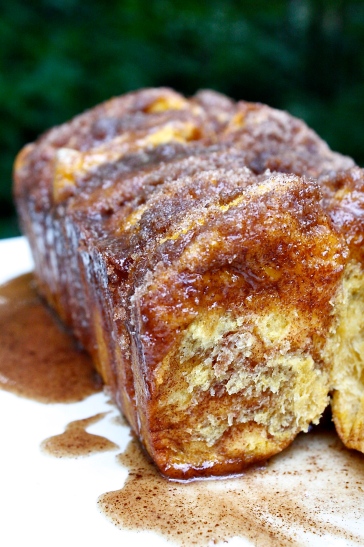 Not to mention my house now smells ahhmazing…can it be fall forever? 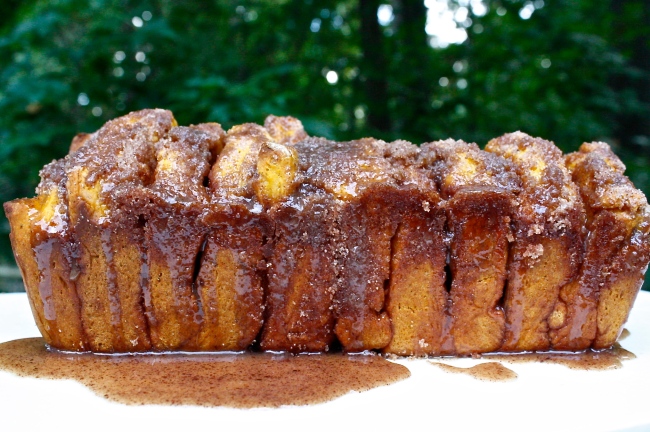 In a saucepan over medium-high heat, brown 2 tablespoons of butter, letting it bubble up and turn a dark golden brown but being careful not to allow it burn (turn black). Once browned, remove the pan from the heat and carefully add the milk, return to stove and heat through. Pour the milk and butter into the bowl and allow to cool so it is no longer hot, but warm. Once it has reached a warm temperature add the yeast and 1/4 cup of sugar and allow to proof (this can take up to 8 minutes, the top will look foamy and the liquid cloudy). Then add the the pumpkin, salt, and 1 cup of flour. Stir until combined then add the rest of the flour 1/2 cup at a time and knead for 6 minutes, until the dough is smooth and elastic and just slightly sticky. If the dough is too moist, add extra flour 1 tablespoon at a time.

Move dough to a lightly oiled bowl and cover with a clean towel. Allow to rise in a warm place for 60-90 minutes or until doubled in size.

While dough is rising, brown another 2 tablespoons of butter. Add the sugar, cinnamon, and nutmeg and mix well. Making sure sugar evenly absorbs the butter. Set aside. Next, grease and flour a 9×5 loaf pan and set aside.

When the dough has doubled in size, punch it down and flip out onto a clean floured surface and knead with hands for 1-2 minutes. Roll dough into a 20×12 inch rectangle. Evenly sprinkle the dough with half of the cinnamon sugar mixture (saving the other half) and press into dough with palms of the hand. Cut the rectangle into 6 strips. Lay strips on top of each other and cut each strip into 6 even squares (cut in half then each half into thirds). Stack strips vertically into the loaf pan (should perfectly fit two rows side by side). Cover the pan with a clean towel and let rise for 30 minutes.

In the meantime preheat an oven to 350 degrees. After rising in the pan, bake for 35-45 minutes (mine took 42) or until top is a very deep golden brown.

To prepare the glaze, heat the second half of the cinnamon sugar mixture in a saucepan and add 2 tbsp of milk, stirring until completely mixed. When the bread is done, pour the glaze evenly over the loaf and ENJOY! 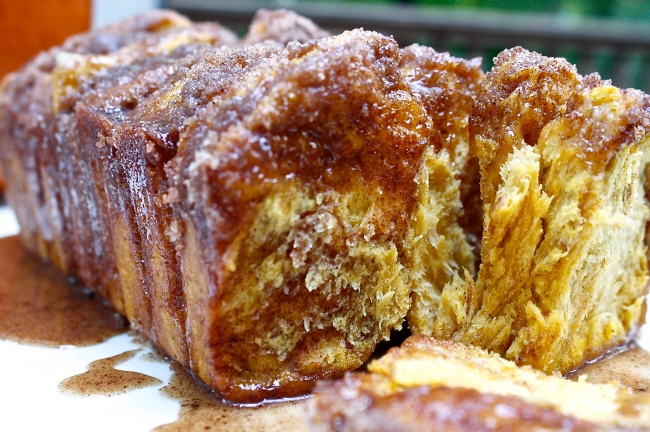 Happy birthday to me 🙂